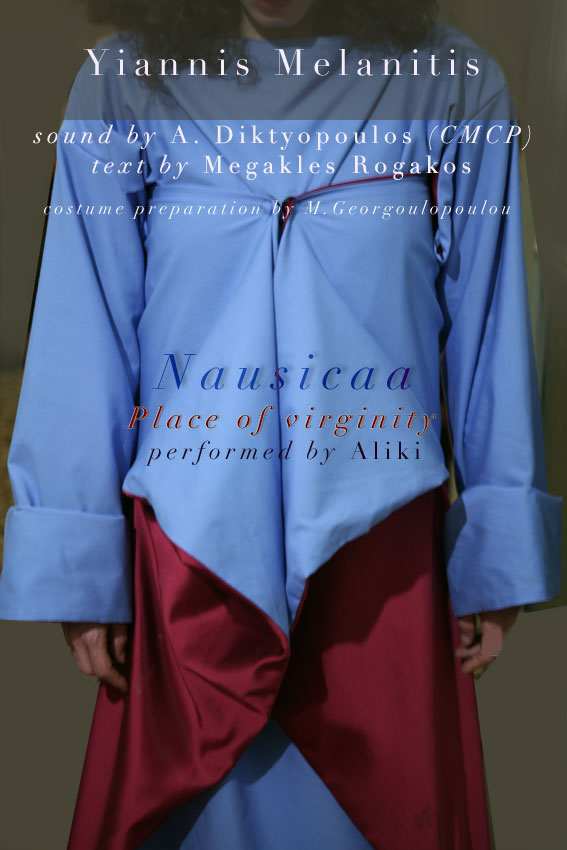 Nausicaa/ Place of Virginity
[part of the work The Land of Noman, · work in five acts, with their correspondances:
Calypso, Naysicaa, Circa, Penelope- the fifth act refers to the residency of Ulysses as Faust in Ithaca. The work The Land of Noman refers to the transformations of a female persona which represents the four different societies visited by Ulysses. Four islands, four societies, four women, four environments of distinct techniques.
At the Bios performance, Nausicaa is presented as a vision of a hyper-civilised society, a reference to the topic community of Scheria, island of Nausicaa. The performer’s actions refer to the correspondences of Joyce in the work Ulysses. Materials:Silicone, blown glass, nitric an phosphoric calcium, hyacinth bloom, cloth.

The labyrinthine Ulysses of James Joyce, consists of a multi-layered text where facts seem to proceed in time overlaps, although the action takes place in 18 chapters, spaced approximately one hour apart from each other, starting at 8:00am on Thursday 16 June 1904, and ending in the early hours of June 17. Joyce produced a schema for the novel Ulysses to help his friend Carlo Linati understand the structure of the book:

... in view of the enormous bulk and the more than enormous complexity of my damned monster-novel it would be better to send him a sort of summary - key - skeleton - scheme (for home use only)...I have given only "Schlagworte" [catchwords] in my scheme but I think you will understand it all the same. It is the epic of two races (Israel-Ireland) and at the same time the cycle of the human body as well as a little story of a day (life). The character of Ulysses has fascinated me ever since boyhood. …For seven years I have been working at this book - blast it! It is also a kind of encyclopaedia. My intention is not only to render the myth sub specie temporis nostri [in the light of our own times] but also to allow each adventure (that is, every hour, every organ, every art being interconnected and interrelated in the somatic scheme of the whole) to condition and even to create its own technique. Each adventure is so to speak one person although it is composed of persons - as Aquinas relates of the heavenly hosts.
James Joyce, Selected Letters, ed. Richard Ellmann (London: Faber and Faber, 1975), p. 271.