Bio-art?
Does modernism reappear through the aestheticization of biotechnology?

Some behaviors, such as wearing navel rings or composing symphonies, are rare or "abnormal" (i.e., very different from the average), but not "unnatural", for human nature is our behavioral norm of reaction, which includes everything that people do. It makes no sense to judge a behavior as moral or immoral, ethical or unethical, on the basis of whether or not it is "natural". Douglas J. Futuyma [1]

Futuyma's attempted distinction between naturality and normality of behaviour may be useful to the introduction and further studying of a generally common tendency to fail to differentiate art from decorative tradition- yet, what is of importance is the concept of novelty after postmodernism and how it is redefined.
In an effort to delineate an aesthetic theory established on mathematical models and especially on the Second Principle of Thermodynamics, where "novelty is an improbable inversion of the general tendency toward ever-increasing probability", the German critic Vilem Flusser [3] defines that "the degree of terror may be taken as a measure of novelty: the more terrible, the newer." This consists a critic theory based on the parameter of how we experience art and in the future it may be established on (the basis of) the Second Principle which, when applied to a system, indicates the increase of its entropy. According to this Principle, the energy of a system degenerates as it transforms (i.e. the kinetic energy turns into heat). The work of art, therefore, is an open thermodynamic system, which is a state of constant flux till it comes to the state of balance (where balance is defined as the final state of the receivers' acquaintance).
Yet, some works cannot be consumed in an integral way and this is due to their complexity. Nevertheless, by the moment they appear, they are inserted into the process of their one-way transposition in time. So, whether they accepted or over passed, they enter a stage where they obtain the properties of a closed system. (closed systems: systems that are able to exchange energy with their environment, i.e. an artwork exposed in a museum, whereas the open systems can exchange material as well.)

Modernization has not yet been accomplished and it is exactly this contemporary transformation from works that constitute self-enclosed, achronic formations, to systems where biological time is being assimilated to the biological base of the work, provides the work with the qualities of unpredictable, perpetually transformed system where many different outcomes are possible to arise.
For Taylor, this is point where theory is inserted: " When artworks are regarded as precious objects whose value is a matter of speculation, they become little more than superfluous ornaments. Through a "speculative reversal that is not dialectical, the struggle to avoid ornament ends by making the art object itself ornament. "[4] "The struggle to avoid ornament" is common to most of the revolutionary artists. From a certain point of view, modernism was considered to be a response to ornamentalisation. Yet in postmodernism the ornament is at the end being transformed to a strange kind of an antibiotic against "personal concerns: art indicates concepts connected to the psychopathology of the artist...
There are three points to be noted:
-Most of the relevant to the term Postmodernism activities imply the unease of the artists to originate prototype works.
-From a point of view, the artwork has "disappeared" through the dematerialization caused by digital information.
-Conceptual and body art have completed the hybrization of the body.

For Futuyma, hybrids are individuals formed by mating between unlike forms. But there is another term adopted from evolutionary biology that makes sense: the hybrid zone," A region in which distinct populations come into contact and produce at least some offspring of mixed ancestry." By this way, not only complexity increases, but uncertainty as well; this is of primal importance in art: a zone where there is no certain offspring, where morphological and physiological strains are the product of a specialised technique, a conceptual process. Even from the times of the ancient Egypt, the sculptor uses specialised techniques "of excellence "; for the ancient priesthood art reflected the cosmic order and perfection, "an incarnation of true beauty".

However, there is a critical point when we pass from a status where information, up to now served as an extension or empowering of the body, (mediated environments, networks) inserts the body in order to reform it in an ontogenetic manner (DNA manipulation).
This occurs at the time when recent artistic proposals present a framework where DNA and art issues are incorporated and re-disposed; consequently, aesthetics expands to include animal breeding techniques, in vitro organisms and fabricated landscapes [i.e. terraforming, the Mars colonization].
Vilem Flusser: "...The world "new" means subjectively any situation which makes us tremble, because it is unexpected. Thus a cow with a horse's head (Russel's example) is newer than an ordinary cow, because it makes us tremble more." In addition, Joe Davis will refer to the lack of any ordinary cow in nature. He denies" that there is any dualism at all between what we consider as "nature" and "monstrosity". In this way, he mentions, all flowers and fruits are considered to be "monstrosities" by definition. " A common rose is in fact a monster much the same as the fictional one Shelly described in "Frankenstein", yet the rose is
non-fiction.
Vilem Flusser again: "Why is it that dogs aren't yet blue with red spots, and horses don't yet radiate phosphorescent colors over the nocturnal shadows of the land?"
Plato speaks about the imitating of models instead of the production of true artworks; thus the artwork resembles to the ideal ["το ιδεατόν"]. All artworks are resemblances of truth as far as they are resemblances of the appearance of things. Art represents a decline of perfection. Could we being artists produce an artwork that lies beyond our interests, beyond our abilities that have been in a way donated attributed to us?
Transgenic art-a term examined later- on the other hand, in a reverse way than the platonic thought, "improves upon nature" by the same way that a Greek sculptor used sequential reductions over the natural model. The problem of artistic manipulations upon nature, of course, is not so simple. For the first time, artefacts [τεχνήματα] (prosthetic or genetically artificiated), can be fabricated not only as a result of our social system planning (in the scientific lab), but also as a result of an artistic imaginative process.

Eduardo Kac presented in Ars Electronica 99 the first thoughts about transgenic art, " a new art form based on the use of genetic engineering to transfer natural or synthetic genes to an organism, to create unique living beings. In the festival's symposium, the analysis concerned to the production of a GFP-K9 dog that would carry the fluorescent protein of medusa "Aequorea
Victoria. The project was finally realised on a laboratory albino bunny GFP Bunny that was presented in Avinion, France. GFP Bunny" has to be considered as an animal that has not been produced through a manipulation process based on human values by means of usefulness -essentially we may argue that, in every respect, is a "useless” animal.

Let's return to the definition of novelty. If we introduce the action of the animal's construction as an artwork in the Flusser's argument,
- at first, the artwork is beyond the limits of any kind of habit, beyond common familiarity.
- it waives its aesthetic quality only the moment it enters the production and becomes commercialized.
This happens because a technique or a specialised technology like the one that produced the artwork is not publicly available. By the time a transgenic animal will be inserted to a system of commercialised distribution, its artistic "values" decrease, and it is conceptually reshaped from a "monstrosity to an expendable, vulnerable object. On the other hand, lab animals do not retain their aesthetical qualities. (Fig.2) [6]. 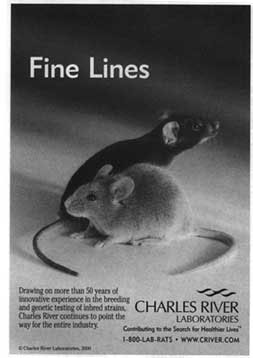 By theoriticizing the organism, we move from the images to the concept of life, realising that transcendal dialectics lead to a transcendal space. The artistic
material (i.e. an animal line) leads to possible, alternative structures where reality is "stretched”; more than the animal itself, the concept of a
fluorescent bunny is not a second nature, but nature itself.
What is next? Perhaps if we were at the place where the new is produced, it would never exist...

References
1. Douglas J. Futuyma, Evolutionary Biology, third edition, Sinauer Associates, Massachusetts, 1998, page 743.
2. Kounellis Yiannis: "The tradition of art is not a decorative one; it has its own ethical and ideological discussion with Francesca Pasini, page 210, Λιμναία Oδύσσεια, editions Agra, 1990.
3. Arti magazine, volume 17, Athens 1993.
4. Mark Taylor, "HIDING", Chicago Press, 1997, page 107.
5. Eric Alliez and Michel Feher, Reflections of a Soul, Fragments for the history of the human body, Zone Press
6. Does novelty in art appears out of the pop tradition; see Kounellis Yiannis, Λιμναία Oδύσσεια, editions Agra , 1990. Also, about the concept of 'shock' as a for the novelty of an artwork, see Yiannis Xenakis, Texts about music and Architecture, editions Ψυχογιός, Athens 2001,pages 166-168
Athens, August 01
Melanitis Yiannis is an artist (MA on DigitalArt) working on interactive performances and has presented works in Europe, N.York and Mexico City. He writes for Futura magazine and artzine-journal.com.
URL: www.geocities.com/melanitis2001, e-mail: melanitis@hotmail.com.